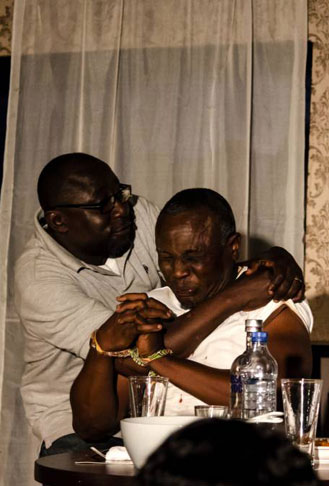 The Overnight Trial is a 2MG adaptation of Ariel Dorfman’s Death and the Maiden. The piece is a reflection on the secrets that haunt Nigeria as a nation and calls for openness in dealing with the ghosts of the country’s past.

In the play, Wandoo Ate, a former political prisoner from an unnamed past military era in Nigeria, had been raped by her captors, led by a sadistic doctor whose face she never saw. She has lived with the trauma for twenty years, buoyed up by her loving husband, Gbadebo Salami, a lawyer.

Years later, after the repressive regime has fallen and democracy is restored, Wandoo is on a visit with her husband to their country home, when he goes out and gets stuck on a lonely road at night. He is rescued by a good Samaritan, who brings him home. Wandoo is certain she recognizes the voice and mannerism of the stranger, Dr. Hassana Danlami, as those of her rapist and the conductor of her torture years before under the dictatorship. Holding him captive at gunpoint, she repeatedly attacks him and demands that he confess his crime. Her husband tries to stand by his wife and her claims, but he begins to doubt her story and sanity. She forces her husband to represent her captive in a mock trial that she devises over the course of a night and a morning.

Wandoo extracts a confession under duress but audiences will find more evidence than not, that indeed, Dr. Danlami is guilty of the accusations she levels against him.

*Warning: ‘Overnight Trial’ is not family viewing and not recommended for people under 18.